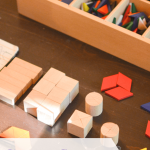 This post is sponsored by Spielgaben- check out their amazing manipulative set!

We’ve kicked off the new school year! This year, I am teaching grades 6, 3 and kindergarten (with a little bit of freedom in defining exactly what those grade levels mean- thank goodness for homeschooled freedom and the ability to have a third grader working a level ahead in language arts, and a level behind in math!). We’ve added an awesome tool to our homeschool line up this year- a Spielgaben set, which is basically all the coolest manipulatives and learning tools a homeschool mom could desire, all together in a wooden box. 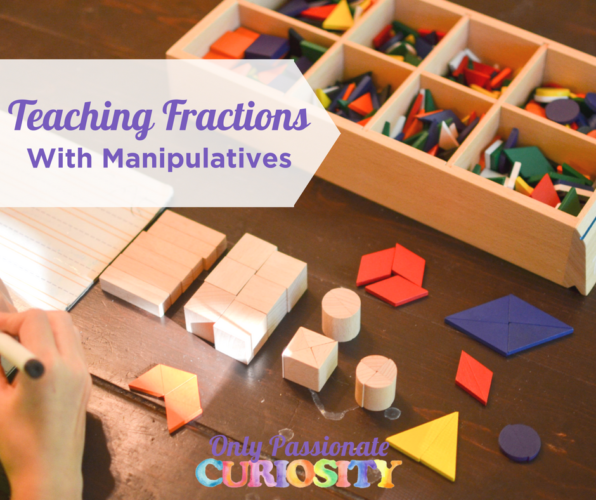 The other day, we were talking about fractions. I had been wasting time on Facebook (surprise surprise) and was cracking up at a video of a poor gal trying to answer a question about what fraction of a pizza she could eat (Language warning- also, I feel kind of bad for her. I’m hoping she was joking and the boyfriend isn’t really that mean). Doodle, after asking me what was so funny and listening to me explain the pizza problem, didn’t quite understand the issue with her answer and it led us to the table to learn a little more about fractions and how they work.

Bug (being the kind of bossy helpful older brother he is) whipped out the dry erase boards to try and explain to Doodle how objects can be cut into pieces to make fractions and how those fractions can be added together. 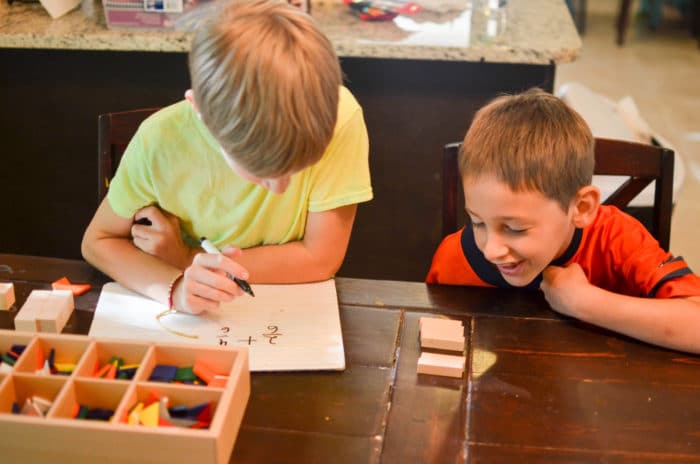 We brought out the Spielgaben set to help illustrate. It doesn’t matter the shape of an object- anything can be broken down into a fraction. All you need to do is cut them into equal sized pieces! 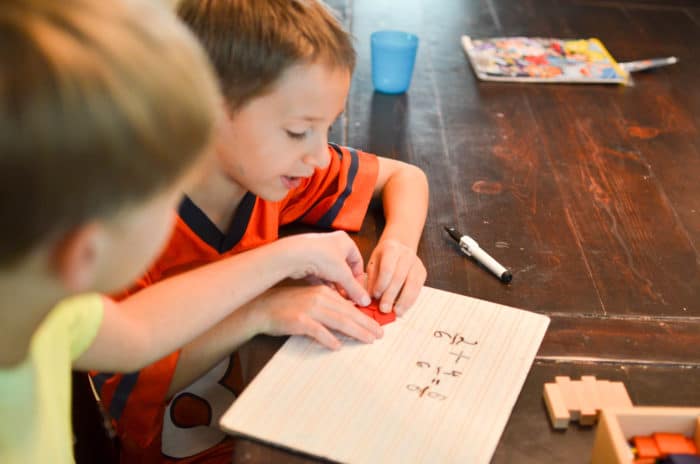 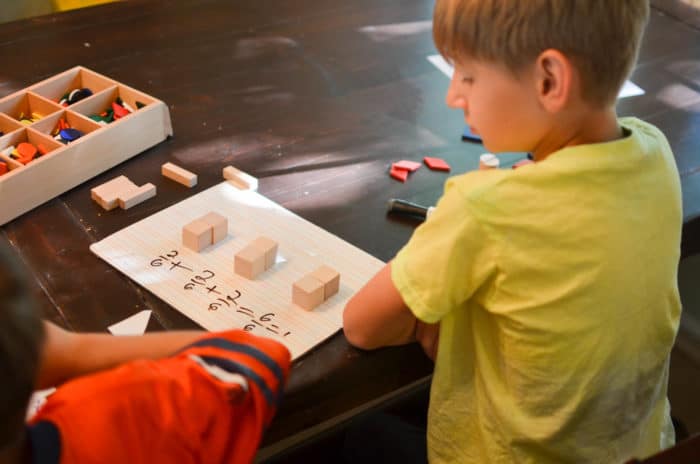 The boys did some basic problems by building shapes, and then breaking them down into fractions, and adding them back up together. Pulling the shape apart and reassembling it helped Doodle figure out exactly how fractions worked. 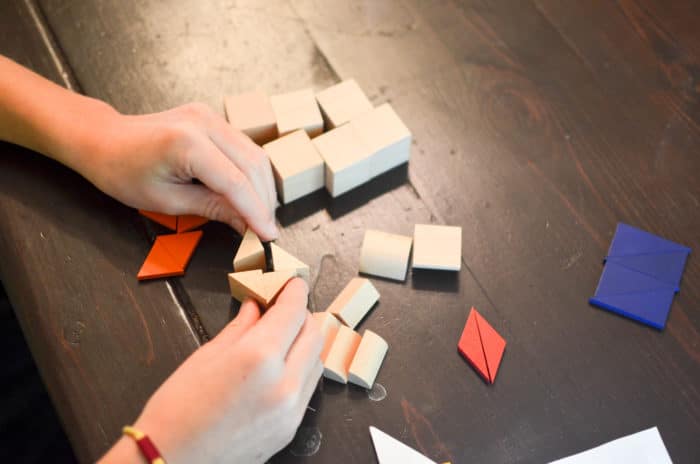 After playing with the blocks and various shapes for a while, I decided to pull out some paper and see just how well the lesson was sticking. Doodle understood completely how he could put the various pieces together to make a large shape, and was able to tell me what fraction it represented (four triangles to make a square would be 4/4. Just one of those triangles was 1/4 of a square). 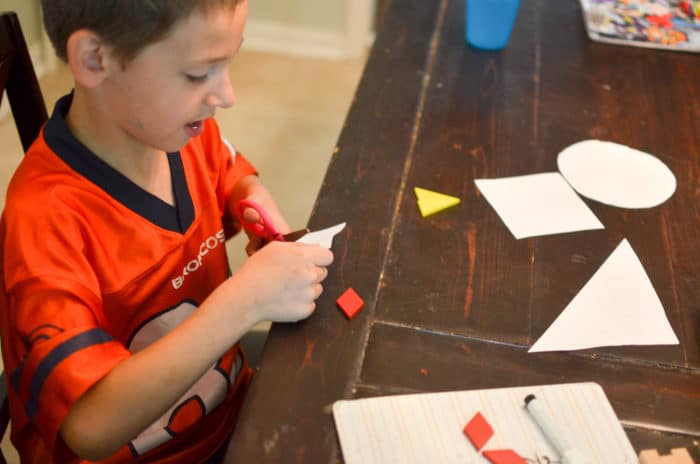 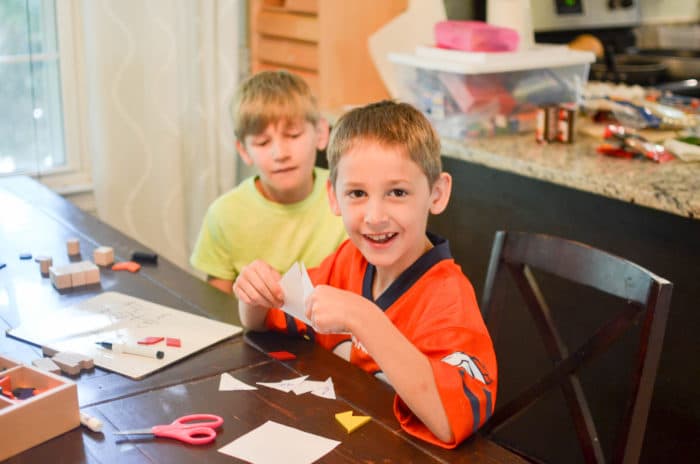 I cut out some basic shapes for him (a triangle, a square, and a circle) and then handed him a pair of scissors and asked him to first cut the shape in half and tell me what fractions those shapes represented. In this case, he cut a triangle in half and was able to tell me that 1/2 a triangle plus 1/2 a triangle was one whole triangle. 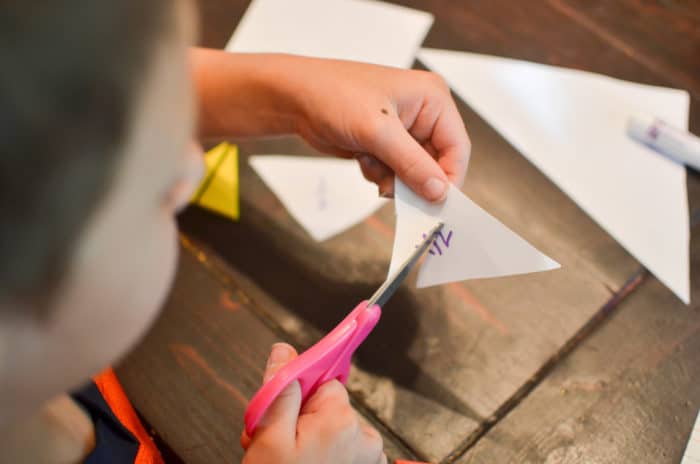 Then, I handed him the scissors and asked him to cut each half in half again. Then, he had to tell me what fractions he had now. He discovered that 1/2 a triangle cut in half created 1/4 of a triangle. 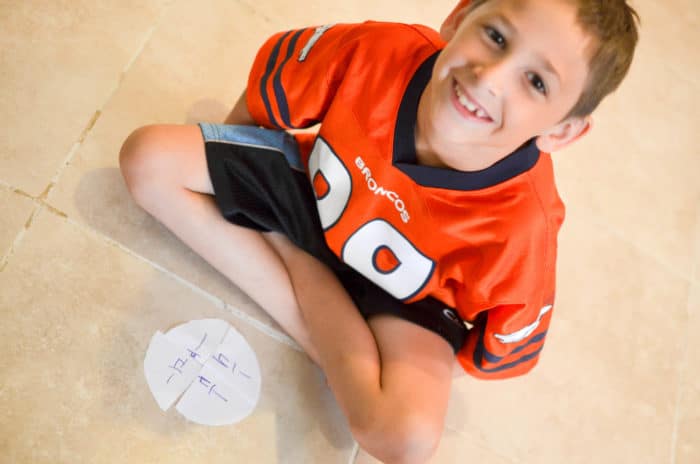 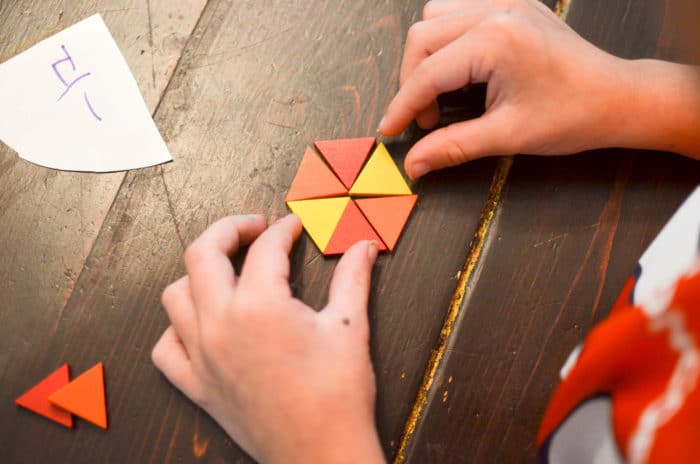 Lastly, I challenged Doodle to build me fraction equations using the Spielgaben pieces. For the picture above, he was supposed to create 2/6 + 2/6 + 2/6. I thought he did a great job figuring out what pieces he needed to make a six-part shape, and then choosing two of each color to represent the 2/6 fraction.

I am so proud of the kids and how well they worked together on their fractions. In the hour we spent playing with their Spielgaben set, they learned so much more than I could have taught them with a worksheet, and it was SO much more fun! 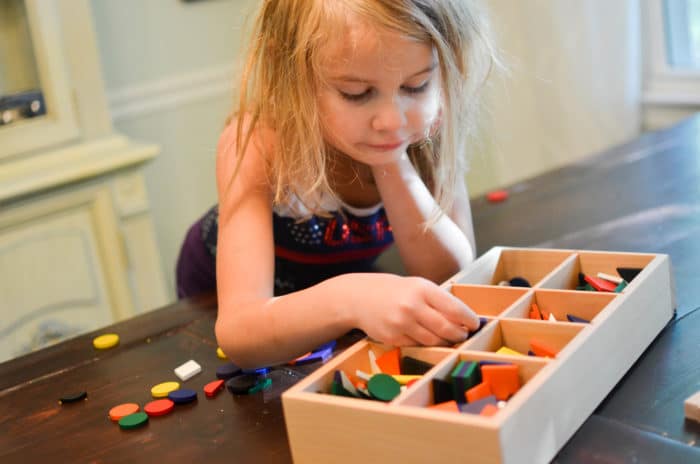 Math (especially in the early grades) is so much more fun with manipulatives. If you are looking for a set that covers just about everything, stop by Spielgaben and see what they have to offer!