This post is sponsored by Venta Airwasher, the amazing machine I never knew I needed. Enter to win one at the end of this post!

I am embarrassed that it has taken me this long to get to this point, but we are finally (mostly) unpacked and settled into our new and temporary home on the Gulf Coast. We won’t be here very long- less than a year actually- but after moving so many times with the military, we almost have it down to a science.

This last move was more than a bit overwhelming for me. I don’t know if y’all remember, but I had a surgery back in April that should have been no big deal, but I am still struggling with the side effects of it. I spent more than my fair share of time in bed this spring and summer instead of doing productive things… like organizing my home or keeping up on housework or being a good mom. So it goes, right?

When the movers arrived to pack our stuff, they arrived at a house that was less than organized. When our stuff arrived here, it was clear to me that we were basically just a hot mess of a family. Good news/bad news, so much of our stuff was damaged that I have been able to get rid of a lot of things that we probably never needed in the first place. Things are coming together!

I figure many of you probably haven’t seen housing on a military base before, so I wanted to take a minute to give you a virtual tour of our home on base. Before I start, I want to make it clear that no, we don’t live here for free (I wish we did!) . . . it’s a common misconception that the military doesn’t pay for their homes, but believe me, we pay rent like normal people. We also have a lot of the same rental rules that other people do… so we learn to make the most of our white walls!

This house is also the newest, biggest and nicest base house I have ever had the privilege to live in. I remember being a young, 18 year old military wife and thinking to myself how awesome it would be to someday live in one of the nicer neighborhoods on base (they are divided by rank in many locations) and it just amazes me that somehow, overnight, my husband’s hair turned grey (okay, mine did too) and we all of a sudden get to live in a house as nice as this one!

Anyways- welcome to our new house! Check out the tour:

This house opens up to a big open space, with lots of big windows. We are able to fit a large area rug and I hung up my most prized possessions, paintings from my Grandma Madeline, who happens to be a very talented artist. The art and the curtains are ALWAYS the first things to go up in the house. I don’t mind living under a pile of boxes, as long as I can see my pretty paintings on the wall! In the living room, we have a Venta Airwasher running all the time. We have a fluffy dog with lots of hair (and all the stink that comes along with it) and the Airwasher keeps the house smelling clean and the air free of dander.

On the other side of the living room, I set up the kids play tent. We have strict rules that the tent is only to be used for reading, so any time they want to go in there, they need to bring a book with them. I have a bookcase right next to the tent so they have plenty of choices, and I will totally admit to loading it up with historical fiction and non-fiction picture books that go along with what we are studying right now. 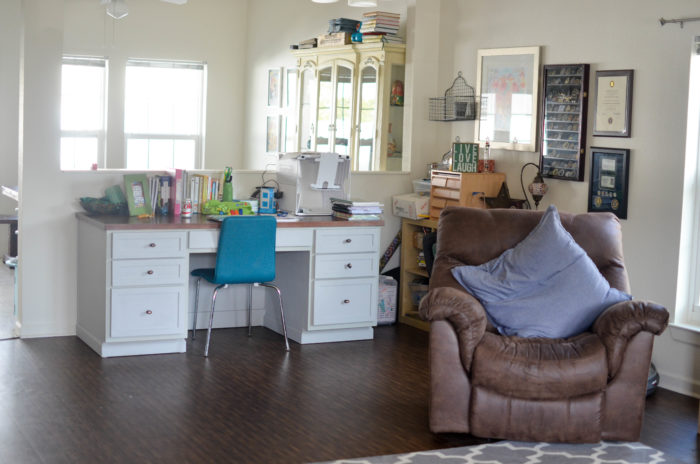 My desk is also in the living room, and looks over a half-wall into the dining room. I had this gigantic custom desk built by my good friend’s husband, and it even has a pull out drawer for the printer to live. It’s something crazy like six feet long, and has all the room I need for my blogging and homeschooling gadgets, like the ShotBox and the laminator and my camera and everything else I hoard because I can.

The kids do their schoolwork at the dining table, which is a big wooden farmhouse table my Husband and I built a couple years ago. I wanted something large enough to seat our family of six, and still have extra room for the kids friends or extended family. This one does the trick! It definitely had a bit of a learning curve for us, so it has some personal charm to it. The good news is, because it does have some charm, I didn’t cry when the movers damaged it in transit.

The kitchen is a nice size in this house, but the cupboards are strangely small. It may just be me and my million kids and too big plates, but I still haven’t figured out the magic trick that allows me to keep everything put away with the doors closed. I have some friends who have offered to come over and work their organizing magic, and I am going to need to take them up on it, because I have officially given up on my own abilities.

Sometimes, I keep the Venta Airwasher next to the kitchen, because it does an amazing job at helping with dish and garbage odors as well. I only moved it out of the kitchen and into the living room this past week when the kids all came down with a nasty bug in the hopes that it would help them get better faster and help prevent me from catching it. So far, so good!

And…. that’s the downstairs. I would totally show you the upstairs, but y’all, I can only get one thing clean at a time. So, forget about it! Upstairs we have three bedrooms, the boys share one space, and Little Miss shares her room with Peanut, but a lot of the time, he sleeps in my room. It’s a bit crowded upstairs, and I still need to purge some of the kids toys to make it work, but it’s home (for now).

I am so grateful for my husband and all the hard work he does to provide our family with a home as beautiful as this one. Our new neighborhood is wonderful, with friendly neighbors (many who homeschool). Every night after dinner, the kids go out to play with their friends, and I chit chat with the other parents, and it feels like home. It’s really the people who make the place.

I mentioned a couple times in this post that we have a Venta Airwasher running full speed, all the time in our new home. I’ve never known I needed a machine like this until I had one- and it’s not something I would normally share on my blog, but after experiencing one in my home, I have been telling everyone and their brother that they need one. I don’t know how it does it but it manages to keep our home smelling fresh, it helps sicknesses pass more quickly, and prevents them from spreading (unless Peanut licks you, in which case you are done for) and has done wonders for my constantly stuffy nose. I went from being a skeptic, to wanting to purchase a second machine to place in my bedroom.

You can win a Venta Airwasher right here by using the giveaway widget below! You may not know that you need this machine, but you do! Enter to win, and have it in your house before flu season really gets going!