Marksburg is another castle along the Rhine River near Braubach in Germany. This castle is neat because of it’s amazing location at the top of the hill in the valley. As we approached the castle, I had to pull over to get a picture because it was just too awesome sitting above the village.

This is the only hill top castle along the Rhine that escaped ruin, and was never “improved” and made modern by it’s inhabitants, so it is still very much a Medieval Castle today. This castle was originally built sometime around 1135 by a member of the house of Eppstein (we visited the ruins of Eppstein castle a couple months ago). The only damage was in 1945 when the American Military shelled it from across the Rhine. This attack ruined most of the roofs, and part of the keep, but as repaired in the 60’s.

When you reach the base of the hill to visit Marksburg, you have to drive up a road on the side of the hill. It’s very narrow, barely wide enough for two small European cars to squeak past each other. My palms were sweaty once we got passed the steep drop offs with no guard rails to the castle parking lot.

From there, you walk up a couple steep staircases to the entry way of the castle. This castle is great because the fortification system and castle walls are still in place, so you get to experience the winding entry way to get into the inner court.

The Inner Courtyard is bare rock, so they carved in steps and ledges. Today, it’s a little wore down, and was slippery in the rain, but beautifully preserved.

The most innermost area of the courtyard is tiny, because it’s almost completely taken up by the castles keep (the main tower) which is 39 meters high. The keep was built on the highest portion of the rock around 1238!

This castle is so tight and narrow, that unlike many medieval castles, it didn’t serve as a village unto itself. Instead, it was staffed only by a small amount of permanent live-in workers (chosen by the Castellan) and the vassals who pledged to defend it only came to the castle when there was a threat of war.

The inner castle is still furnished with antiques common to the castle’s time, and is wonderful to explore with children. We ended up on a German tour, so we stayed a little far back from the group with our little ones. This gave us a chance to look closely at the beautiful furniture and artwork.

One cool thing we learned about the castle was that at one point, the toilet in the dungeon lead to a secret tunnel escape down the hill. Today, this escape has been covered, but we loved talking about how the people could escape through the toilet if they needed to! The people of the middle ages were creative for sure! 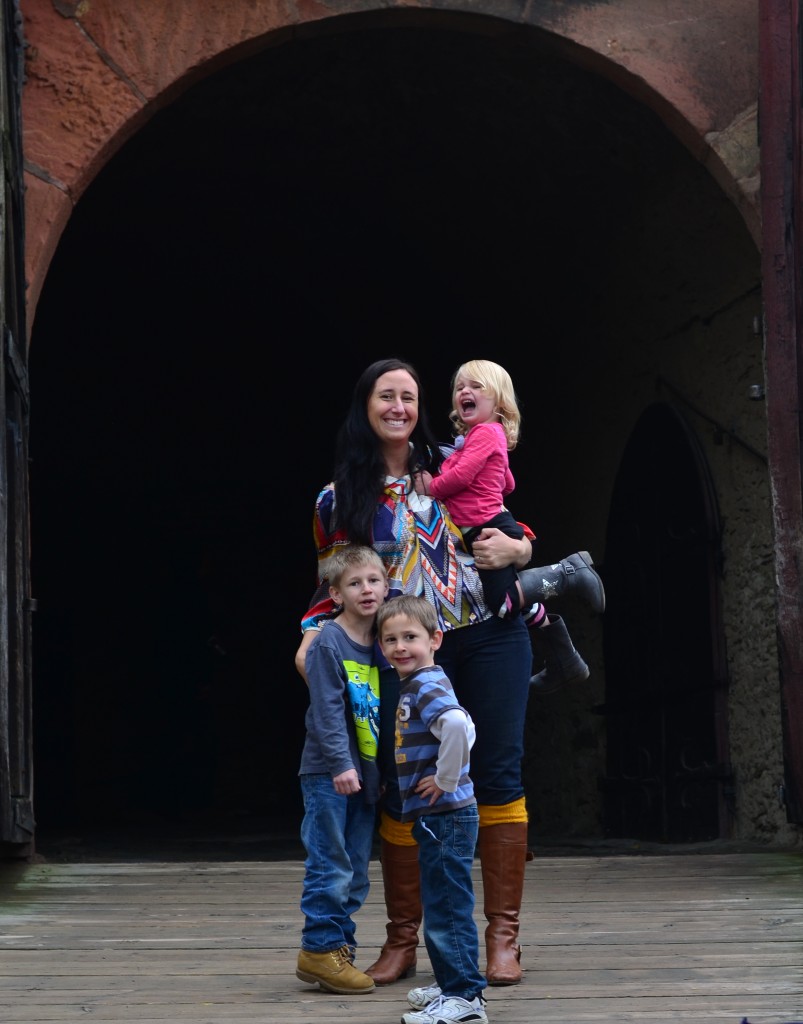 If you’re local, Marksburg Castle is an easy hour drive. Parking costs 2 euros, and there is a daily English tour in peak season. If you end up taking a German tour, you can rent an English guidebook for 5 euro. I woudn’t recommend taking a stroller because of all the stairs up the hill, but when you’re tired from lugging little ones up the stairs, you can take a break in the café for decently priced food and drinks.